After the East India Company

Throughout the next 50 years there was much active service in Burma, Afghanistan, the North-East and the North-West Frontiers of India, Malta, Cyprus, Malaya, China (the Boxer Rebellion of 1900) and Tibet (Younghusband’s Expedition of 1903).

Well before the mutiny British India had experienced great difficulty in maintaining control of its North Western and North Eastern boundaries. In the North West the hardy and rebellious Pathan tribesmen were disinclined to admit of British control and behaved accordingly. Isolated British garrisons were continually being attacked whilst relieving columns were harried incessantly by Pathan marksmen whose natural shooting and fieldcraft skills made them formidable foes.  This continual fighting was further complicated by the presence of the vital buffer state of Afghanistan further to the West.

With some reason Britain feared that Russia would gain control of Afghanistan and use it as a gateway to attack British India. To avoid this Britain tried to ensure that Afghanistan was pro British even to the extent of political interference in the internal workings of governance and Royal succession . This interference was bitterly resented and led on several occasions to outright war in which Britain suffered a number of reverses even on one occasion having an occupying  force  trying to extricate itself from Kabul back to India being totally wiped out. This political and military manoevering between British India and Russia with Afghanistan as the prize was known as the `Great Game’and gave rise to a host of Kipling’s stories and ballads. We will see that Gurkhas played a significant part in this deadly game.

To the East in Burma the mountain tribes resented the assumed domination of Britain over their tribal lands and reacted by attacking newly established tea growing plantations and ambushing relieving troops as they arrived. Here the terrain was entirely different, great swathes of thick jungle cloaked the precipitous hills making the going at best difficult and at times impossible. It was a terrain that Allied troops would become all too familiar with in World War Two.

To the Far North beyond Nepal and the vast wall of the Himalayas lay Tibet and China, areas that could easily become hostile and threaten British India. 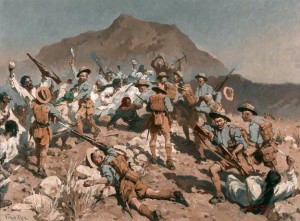 These frontiers had to be defended and in so far as possible pacified and as we shall see it was on this unending and often thankless task that the forming Gurkha regiments were to be continually employed . One regiment , the 5th became part of the permanent Punjab  Frontier Force which spent its whole time on The North West Frontier. It was a Brigade sized force consisting of mountain artillery, cavalry and infantry and had an enviable reputation for efficiency and skill. The Guides whom we have already met fighting shoulder to shoulder with the 60th and the Sirmoor battalion of Gurkhas on Delhi ridge formed a large component of the Frontier force. Composed of a high proportion of Sikhs and including Pathans they knew the country intimately.  It was a great accolade to Gurkha fighting ability that a battalion of them should form a permanent part of this elite force. Other Gurkha battalions took their turn as campaigns developed on both frontiers.

In the East  Gurkha battalions were raised specifically to cope with the hostile tribes such as Nagas, Abors , Lushai and Manipuri who disputed what they regarded as the invasion of their tribal territories by British India. The 6th ,8th and 10th were all raised for this specific purpose.  The 6th underwent many changes of title which reflected its transformation from a mixed regiment to purely Gurkha one.

If you want to know more about or history you can visit our museum in Winchester or take a look at their website.